The Traumatic Reconciliation of Memory and Reality
Evan Sweet, 2014 Caller-Zolondek Fellow, recounts memories from a long journey
The minibus ride is uneventful; itʼs still quite early (we left at 9:00am) but the bus is full of all sorts of people, all going to the same destination, and listening to the same Polish Top 40 hits the bus driver is playing on the radio; oblivious or desensitized to the harrowing emotional journey his passengers will embark on after they leave his coach. Largely silent low conversations can be heard between travel companions. Sometimes laughter would escape the silence and an annoyed glare would be sent in their direction. Already a full three weeks into our journey across Europe visiting sites of the Nazi oppression and of former Jewish civilization, my travel partner, Jonathan, and I had become hyperaware that the presence of others frequently interrupted the importance or “sacredness” of the spaces we visited.
When one arrives in Krakow, offers of full package tours of Auschwitz are advertised by guides on the street as well as in every hostel
at check-in. At least 15 different flyers advertise trips for around 100 PLN (about $33). These groups provide transport, food, and guided tours of the camp; but also have you back on the bus at a comfortable hour regardless of your desire to stay longer. (Jonathan and I declined an organized tour in favor of an independent trip). Disembarking from the minibus, you must walk through a large parking lot full of private cars, but more notably chartered tourist busses. School children filed out of coaches, lined up in front of the main office to be counted by their teachers and pushed through turnstiles and into a staging area where tour leaders who will guide them through the campʼs horrors meet them. Independent travelers like Jonathan and myself are required to join guided tours to combat the overcrowding and large numbers of visitors to the death camps. You are quickly given a headset, and placed with a group of about 20 other individuals, with the only commonality between you and the others being language. Our group was a mix of Americans, some Australians and Brits; an unfriendly Canadian woman who had stayed at our hostel, two Japanese hipsters, and a mix of other English speakers. As far as Jonathan and I could tell, we seemed to be the only Jewish members of our tour group. 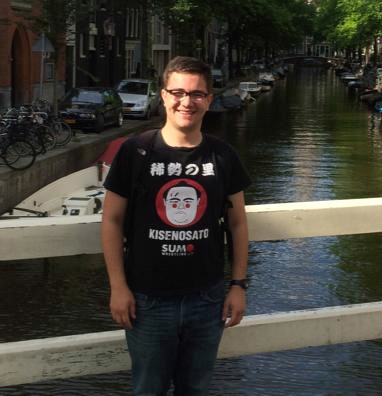 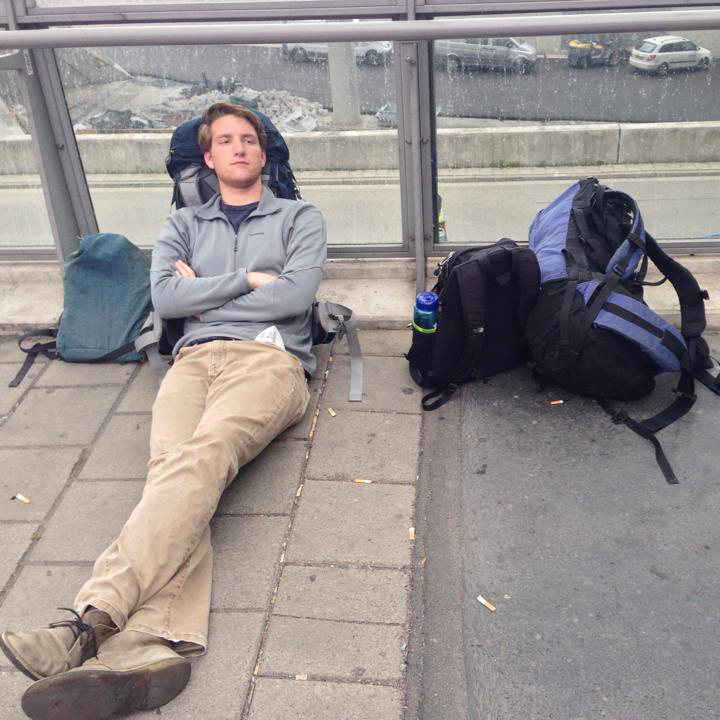 He spoke faster and faster, but more quietly, until I could barely tell that words were leaving his mouth. I turned to the commandant, who gave a curt nod. What was going through my mind in that moment? Now I cannot remember, but I suspect that it was a banal nothing. I pulled the trigger.
There was a flash of light and for an instant I ceased to exist. I felt my shoulders tense as though I was carrying a great load and I heard the prisoner whisper a word, one last word, with empyreal serenitude. The word took his life with him as it escaped into unreality. The light was gone and his lifeless corpse pitched forward, brainless, into the cobblestones, which, as a last indignity, shattered his nose. A great noise issued from hundreds of mouths, and I could not tell whether it was one of joy for the one who had served his plenitude and then escaped, or one of misery, a lamentation. Several rounds from a machine gun cut short the burst; I am still unclear about its nature.
The commandant signaled for the dismissal of the prisoners and the dispersed like a river of gray mud. The Sonderkommandos remained still; there were no trains arriving until the afternoon. I stepped over the body, the capacious stomach which dwarfed the rest, even in shrunken death, and called for two of the Sonderkommandos to take the body to the crematorium. The two thin, tall men with sunken eyes that were nearly black struggled to pick up the body. At first, the dragged him by the legs across the square, leaving a trail of blood. I did not like this. I told them to carry him. They hoisted him on their shoulders, a cold arm slung on each manʼs shoulder, as though he were still alive, merely wounded.
We walked towards the crematorium. I was fortunate that one of the Sonderkommandos collapsed – a brief respite for me. As I screamed at them, they began to walk again, but they did not have the strength to carry him – instead they dragged him, one holding his arms and the other, his legs, so that prisoner 304805 bent like a misshapen crescent, his swollen belly dragging on the ground. We walked very slowly, I could not help it – a grotesque procession, Sonderkommando, corpse, Sonderkommando, me; in my mind, an Arabian caravan navigating an infinite labyrinth, up to the knees in sand; me, bent double by the weight of my pack, carrying a secret treasure plundered from a neighboring kingdom; I do not even know what it is.
Touring Jewish History
Zolondek A&S Holocaust Scholarship recipient Sibel Solagan remembers her favorite parts of a summer spent traveling and absorbing cultures
This past June, I was absolutely honored to receive the Zolondek A&S Holocaust Scholarship in order to study about the Holocaust. The travel grant allowed me to visit five main cities: Paris, Amsterdam, Berlin, Vienna, and Prague. In each city, I was required to visit certain monuments, museums, and synagogues with many sharing information about the horrors of the Holocaust.
The most surprising thing that I learned in my trip was how a majority of the synagogues in Berlin werenʼt necessarily destroyed during World War II, but rather they were simply taken down to make more living space for the growing population after the war. Many memorials commemorating these synagogues are scattered throughout Berlin. I was able to visit the New Synagogue, which was one of the only synagogues to survive the war. Today, however, it has been turned into a museum of Jewish history in Berlin. 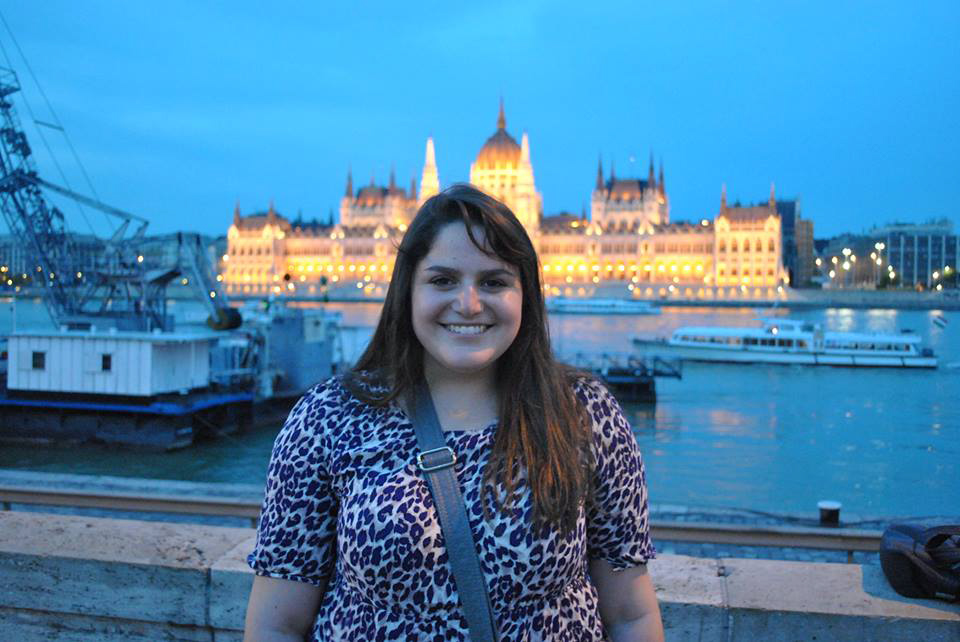 In addition, I was impressed particularly with Amsterdamʼs Dutch Resistance Museum. The Dutch Resistance Museum was intriguing simply because unlike other sites, it gave a glimmer of hope for its visitors to see how a people tried to fight against the Nazi oppression. This museum really focused on the questions that Dutch citizens were asking themselves at each step of German occupation throughout Holland. What was most fascinating was the innovation of the Dutch people to try to protect their friends, neighbors, and family from the atrocities that possibly lay ahead. Dutch citizens worked hard to create underground newspapers that were produced in their own homes to spread information among the resistance movement. Others recreated identical fake identification cards for their fellow Jewish citizens. For me, remembering that this was a time when todayʼs technology was nonexistent made all of the work even more impressive.
Overall, this trip was a wonderful learning experience. The places that I saw and the people that I met in my travels will forever stay with me. I hope that by partaking in this experience, I will be able to continue to educate others about the Holocaust and that I can be motivated by the words of one of the most innocent victims of the Holocaust:
“How wonderful it is that nobody need wait a single moment before starting to improve the world.” – Anne Frank
Tags:
jewish studies
zolondek scholarship
sibel solagan
evan sweet
jonathan sarfin