Arts and Sciences Professor Emeritus Edward Stanton’s recently published book "Wide as the Wind" has been named by the Independent Book Publishing Professionals Group as one of the best indie books of 2017.

Stanton, formerly a UK professor of Hispanic studies, based his young adult novel on the decade of research and traveling he did on Easter Island. The prophetic story of adventure he created reflects the Polynesian exploration of the Pacific Ocean in wooden, handcrafted canoes with no metal parts or instruments of navigation. The National Geographic has called the Polynesian exploration the grea 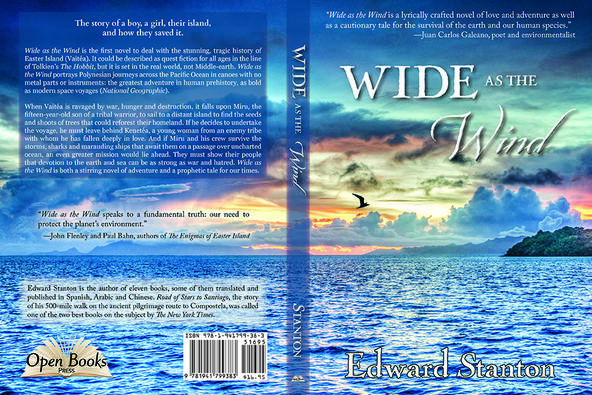 Stanton’s book is the winner of the Young Adult Fiction category in the 2017 Next Generation Indie Book Awards, the world’s largest not-for-profit book awards program for independent publishers and self-published authors.

The awards are judged by leaders of the indie book publishing industry, including many with long careers at major publishing houses. Their love of a great read and experience in the publishing arena identify books deserving a wider audience.

Indie, a casual abbreviation for independent or independence, traditionally refers to independent art, music, film, literature or other cultural endeavors created outside of the mainstream and without corporate financing.

To help indie authors and publishers reach a wider audience, the top 70 books in the 2017 Next Generation Indie Book Awards will be reviewed by New York literary agent Marilyn Allen of Allen O’Shea Literary Agency or one of Allen’s co-agents for possible representation in areas such as distribution, foreign rights, film rights and other rights.

UK is the University for Kentucky. At UK, we are educating more students, treating more patients with complex illnesses and conducting more research and service than at any time in our 150-year history. To read more about the UK story and how you can support continued investment in your university and the Commonwealth, go to: uky.edu/uk4ky. #uk4ky #seeblue