Sallie Powell knows how painful it is to have a passion and a dream denied. Powell is one of many women who grew up in Kentucky during the early 1970s and never enjoyed the experience of playing basketball.

“The equivalent of two generations of women in Kentucky did not get the chance to participate in high school basketball,” said Powell. “I see that as an injustice.”

It is not hyperbole to say that Powell’s identity as a woman and a Kentuckian is molded by her love for basketball and the athleticism that runs deep in her family. Although gender discrimination kept Powell from pursuing her high school basketball dreams, she did eventually compete at the collegiate level thanks to Title IX. While playing ball for Kentucky Wesleyan College during the 1974-75 season, Powell discovered her maternal grandmother also played basketball during the 1910s. 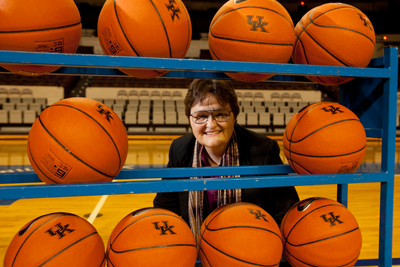 Because we stand to learn a great deal about gendered identities from exploring women’s athletics, Powell has focused her dissertation on the history of girls’ high school basketball in Kentucky prior to Title IX. Girls’ basketball, Powell realizes through her research, is a matrix for understanding how our society constructs girlhood and sets parameters on what it means to be feminine.

“One of my paternal aunts revealed to me that people told her if she played basketball she couldn’t have babies,” Powell said. “Others I’ve interviewed are surprised that anyone would be interested in their basketball careers. Society hasn’t valued that aspect of their lives, yet once these women recall their basketball experiences, they come alive and return to their glory days with fondness. Their accomplishments are important because they signify fun, freedom, and control of the body that transcends gender barriers.”

While developing her project, Powell identified the passage of Title IX as a pivotal moment in the development of girls’ basketball. The 1972 amendment prohibits gender bias in educational institutions that receive federal funding. The law protects gender equity in both high schools and colleges, and while it is typically associated with athletics, Title IX extends to all aspects of education.

“When I was young, I was told I could not play the drums because that was a ‘male’ instrument,” Powell said. That Powell could not play drums in school because of her sex seems remarkable in 2009, but it’s just one instance of the degree to which Title IX has galvanized gender progress in all aspects of education, not just athletics.

Although Title IX helped girls’ basketball to flourish, it is by no means the first moment of gender progressivism in Kentucky athletics. From 1921 until 1932 Kentucky was one among only a few states that played its high school girls basketball state tournaments according to the standard full-court, five-on-five game.

“Kentucky was unusual in that it played by ‘boy’s rules,’ Powell said. “Most other states facilitated a modified rules game, a six-on-six, non-contact sport in which the players couldn’t cross the mid-court line. This style of play was physically confining; the mid-court line was like a wall that in many ways represented the barriers women faced in other facets of society.”

Powell’s interest in women and culture has evolved during her time at the University of Kentucky. After studying with Gerald Smith, she decided to write about Brenda Hughes, the only African American woman to officiate the Kentucky girls Sweet Sixteen tournament. Since taking Smith’s class, Powell has broadened her scope to look at the state’s girls’ basketball tradition holistically and to examine how high school basketball influences both gender and race. 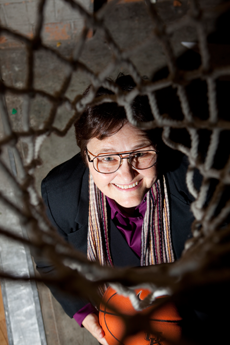 Those interested in the relevance of Powell’s project might recall the recent outburst by the nationally syndicated radio host Don Imus, who denigrated the University of Rutgers women’s basketball team by referring to its players as brutish and tattoo-laden.

“Imus attacked women as a whole, but he attacked African-American women specifically with his derogatory remarks,” Powell said. “His comments might be seen as the impetus for the second major strand in my dissertation. How does the construction of femininity in high school girls’ basketball compare across racial lines in Kentucky?”

Powell’s work is doubly important in a state that has traditionally been enamored with men’s basketball. Even now, major girls’ high school basketball tournaments are not played in our state’s largest venues, Lexington’s Rupp Arena and Louisville’s Freedom Hall, and while it’s hard to imagine the abolishment of girls’ basketball, tightening economic resources continue to threaten the opportunities of equity in education. For this reason, Powell knows that girls’ basketball is important because it reminds us of how we constitute our society.

“We never thought that girls’ high school basketball would stop, but the fact that it did stop is significant,” Powell said. “George W. Bush ran for office in 2000 with the agenda that we no longer have a need for Title IX and gender equity in educational institutions. Other events preempted his assault on Title IX, but it’s hard to say what would happen if the legislation weren’t in place.”