Steve joined the University of Kentucky in 1998, and spent his first two years in Lexington teaching at UK while he completed and published from his doctoral dissertation.  He became an Assistant Professor in 2000, received tenure and promotion to Associate Professor in 2004, and began acting in the capacity of Associate Chair almost immediately afterward, a job he held off and on, informally and formally, until 2015. He served as President of the Kentucky Political Science Association in 2012-2013, and helped edit the KPSA's research journal during its inaugural issues.

SERVICE - Originally hired as a political methodologist to teach quantitative analysis to UK graduate students, Steve quickly saw his responsibilities in the undergraduate program grow. He began directing the department's Undergraduate Studies program while still being promoted to Associate rank, leading a complete overhaul of the department's curriculum from 2004-2006, the framework of which remains in place today.  He also impacted the curriculum of the College of Arts & Sciences during those years as a long-serving member of the A&S Educational Policy Committee -- chairing the EPC during the year when it created UK's International Studies program and culminating his service in 2010 when the EPC revamped the college degree requirements.  His proudest accomplishment while heading that committee was that he successfully convinced A&S to create an outstanding teaching assistant award to recognize the College's most-dedicated and talented T.A.'s, a program still in place today. Finally, Voss was one of the faculty members who worked on creation of the UKCore general education curriculum, from some of the earliest brainstorming retreats that shaped the learning outcomes and curricular framework, through the development of the U.S. citizenship and diversity requirement, to the vetting of courses that would teach Inquiry in the Social Sciences.  In sum, Voss has been involved in the shaping of all three sets of curricular requirements that undergrad Political Science majors must pursue.

TEACHING - Voss' teaching duties evolved along with his dual administrative roles during the department's lean years. Originally a consistent member of the department's graduate methods sequence, he had to be shifted out of it once Political Science and Sociology started taking turns delivering that training and younger political scientists wanted a piece of the action -- so now he cycles through a diverse and widely varying rotation of upper-division undergraduate courses, including American Campaigns & Elections, Civil Liberties, Legislative Process, Social & Political Movements, Racial & Ethnic Politics, and Kentucky Politics & Government (not to mention the department's honors thesis capstone seminar).  All through this period, he also regularly helmed the program's big lecture-hall Introduction to American Government, making him the first professor with whom a plurality of our undergraduate majors (not to mention many of our starting Teaching Assistants) have studied and worked.  The dizzying array of teaching responsibilities did not stop Voss from winning repeated recognition as a teacher, especially when students get to determine who gets recognized.  Voss has won teaching awards from the UK Alumni Association, the UK College of Arts & Sciences, and most recently from the Delta Chapter of Pi Sigma Alpha, which gave him their inaugural Outstanding Professor of the Year Award in Spring 2022.  The UK's Division of Student Affairs recognized Voss with a Faculty Partner Award due to the strong support he gives undergraduates who try to host politically educational events.

RESEARCH - Steve's methodological training has allowed him to contribute to a variety of scholarly literatures.  His early work focused on race and the U.S. South, especially as regards elections and voting behavior.  However, his quantitative-analysis toolkit allowed his work to expand to included other topics influenced by culture and ethnicity such as research on American immigration attitudes, on Quebec's secessionary politics, and on political and social/cultural influences shaping international commerce.  Some of his current work shifts geographical focus to look at ethnicity and migration politics in the Balkan region, as well as attitudes toward the death penalty (especially in the Albanian world) and toward women's rights globally. His articles have appeared in numerous peer-reviewed journals, including the American Journal of Political Science, the Journal of Politics, International Studies Quarterly, and Public Opinion Quarterly.

PUBLIC OUTREACH: Steve has served for many years as a nonpartisan media commentator, especially during election season in Kentucky, having appeared more than a thousand times per year in local, national, and international news during key years.  He has served for years as ABC-36 WTVQ's political analyst, and appears as a recurring guest on radio station WVLK, including a couple of appearances as a guest talk-show host.  Steve also occasionally works as a voting/elections and Kentucky politics consultant in his private time, when doing so can bring in research money that lets him update his technical skills and provide professional employment for past & present UK students.  Partly thanks to his outreach activity, the Martin School of Public Policy & Public Administration granted Voss their prestigious William E. Lyons Award for public service and asked him to become an honorary affiliated member of their school.

ROOTS - Before moving to Lexington, Steve lived for eight years in the Boston area while earning his doctorate from Harvard University (where he taught courses, worked as a research assistant, and edited a travel guide) and prior to that spent all of his life in Louisiana (where some of his jobs included working as a political reporter and working as a staffer in the State Senate).  Like the city of New Orleans where Steve was born, his own ancestry combines a wide ethnic mix, including German, (Cajun) French, and (Cuban) Spanish roots. 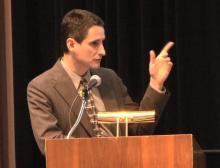