My research interests lie at the intersection of Film Studies, Russian studies, and Animal studies.

My current book project, tentatively titled The New Soviet Animal: Re-Imagining the Human-Animal Divide in Revolutionary Russia, studies how animals were reconceptualized in Soviet culture after the Russian Revolution of 1917. Relying on an array of cultural texts—films, poems, novels, and paintings—, I argue that Soviet ideologues turned to animals as potential allies of the working class, who could participate in, and mutually benefit from, the building of communism. I examine how Soviet artists and intellectuals pioneered a philosophy of cross-species egalitarianism that reconceived the human-animal divide as had been inherited from the French Enlightenment.

For my second book project, I plan to deepen the research I have conducted on race in Soviet society, specifically on the presence of blackface in late Soviet visual culture. I intend to examine how Black Soviet film stars, singers, stage actors, and poets, who permanently resettled or were born in Soviet society, navigated and built careers for themselves in the Soviet performance industry, which claimed to have transcended the racialized politics of capitalism.

Additionally, I am interested in, and have published on, the topics of film theory, queer studies, and posthumanist philosophy. I am currently working on an article about early stop motion and insect films in the early twentieth century and another article about the significance of animals in 1930s Russian film under Joseph Stalin. I also have an essay in the works about the intersection of queerness, animals, and psychoanlsytic theory in Alfred Hitchock's cinema. My research fuels my teaching at all levels of the curriculum, and I encourage students to develop original research projects, which can be expanded for conference presentations and graduate work.

• “The Soviet Flâneur-Turned-Marathoner: The Movement of Characters and the Character of Movement in Georgii Daneliia’s 1970s Films,” Soviet Films of the 1970s and Early 1980s: Conformity and Non-Conformity Amidst Decay, ed. Tim Harte and Marina Rojavin (Abingdon: Routledge; 2021), 97-116 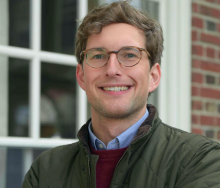